I have a keen interest in food history and agriculture history. I own and operate a historic Farm Stay. Cooking from 19th century cook books is one of my passions. I have a love for farming too.

But I knew that the chicken I could buy at the grocery store was nothing like the chicken that was being cooked in those old books. So I had to know. I had to try. So I had to raise some old style, heritage birds. or what we should really call, Standard Breeds. A standard breed chicken is capable of sexually reproducing by itself. The modern chicken that is most commonly eaten today, the Cornish Cross Broiler, is a hybrid and as thus can’t reproduce on its own. She and he is a hybrid that has been in development since about the 1950s. Today that bird gains weight quickly and is ready to butcher in 6 to 8 weeks. This chicken does not live long enough to mature sexually and would probably have some health problems if it did. They have the ability to rapidly convert grain/feed into meat.

So I settled on two standard breed birds for my experiment, Silver Laced Wyandottes and White Plymouth Rocks. I purchased them from Murray McMurray Hatchery in March 2016 and butchered them in September 2016 at about 22 weeks of age. At the same time my friend and partner in all things farming raised up a batch of Cornish Cross Broilers that we butchered the same day when they were 7 weeks old. Circa 1900 standard breed birds were used for meat and eggs and of course they can sexually reproduce. They take 20 to 24 weeks to reach a butchering weight. That is a lot longer than the 6 to 8 weeks.

The standard breed birds were smaller at 22 weeks then the hybrid birds who were only 7 weeks old. That was a bit disappointing. The broilers had larger breasts and smaller legs and a wider hip. The standard breed birds were taller, had a much smaller breasts, in fact the breast bone was sometimes prominent. The leg quarters were large and well developed compared to the broilers and that dark meat was very dark.

And then we had a chicken tasting. We roasted and fried one of each bird. The broiler tasted as I expected in both cases. Our home-grown broilers are quite tasty. The only thing I don’t like is the dry breast. The standard breed birds overall had a better ‘chicken’ flavor. The breast was much smaller but it was very tender, moist and flavorful in both the roasted and the fried. The legs were a bit tough, especially in the roasted bird. I wonder if brining will fix that? And some thought the skin was a bit too tough.

I plan to continue raising some standard breed chickens, even though it is more expensive ( more feed and more of my time) than the Cornish Cross Broiler. I want to try again and read more cook books. Make more observations. I’m not here to demonize the Cornish Cross hybrid, I’m here to learn and try to rediscover old foodways.

Please come back to this post in the future I plan to update it periodically ! thanks for reading. another interesting article is here, http://heritagefoodsusa.com/blog/the-chicken-of-tomorrow-needs-to-be-the-chicken-of-yesterday/

This webpage sells this sort of chicken, ready for your freezer http://goodshepherdpoultryranch.com/ 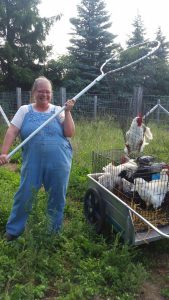 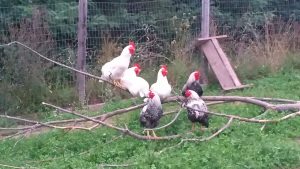 some of the roosters we butchered 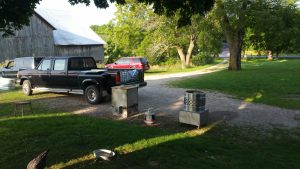 part of our butchering set up 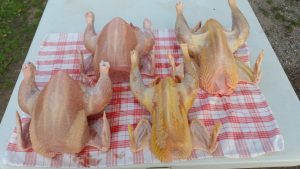 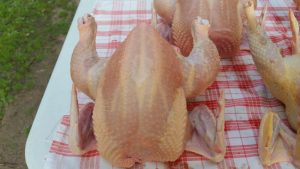 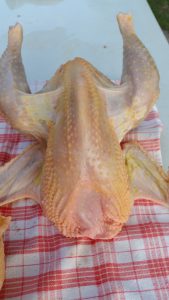 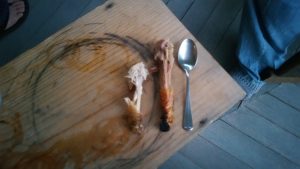 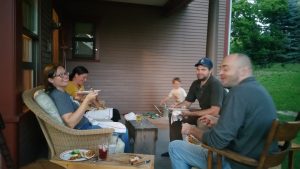 This entry was posted on Friday, September 23rd, 2016 at 11:48 pm and is filed under Hillside Homestead News. You can follow any responses to this entry through the RSS 2.0 feed. Both comments and pings are currently closed.