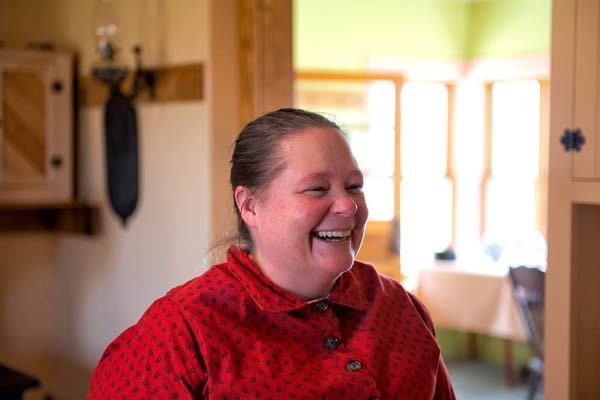 This is your invitation to visit Hillside Homestead on Sunday October 27 from noon to 5pm for our annual fall event, “The Apple  Bee.” This is free and open to the public and very family friendly! The last public event we had in June was very popular! I hope to see many of you again later this month! 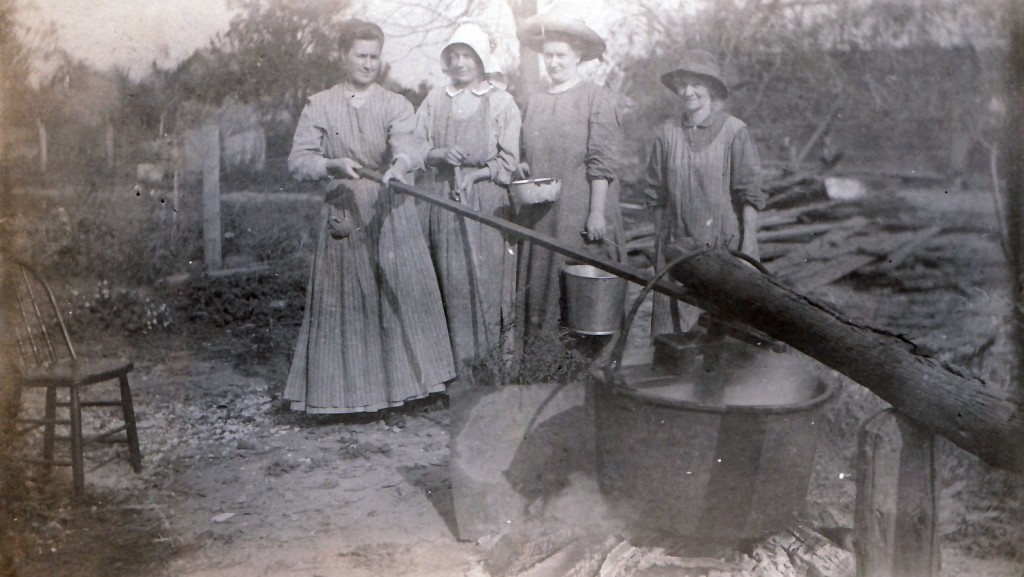 The center piece of the event is the apple butter boil! We will be making apple butter, following the traditional 19th century method. The recipe is really quite simple. Take apple cider and boil it down to half. Add in the prepared apples and boil it hard till the apples break apart. Then cook it down till it is thick and smooth and so that it spreads like butter. This is a real hands on experience. Come give it a try and you can even have a taste! Just for fun here are some of the numbers…

There will be some games to play or just sit back on the porch and enjoy the rolling hills and orchards. Lots of good old fashioned doings. Please come and join us, we would love to see you! Come visit Hillside Homestead and experience early 20th century life at the farmhouse! 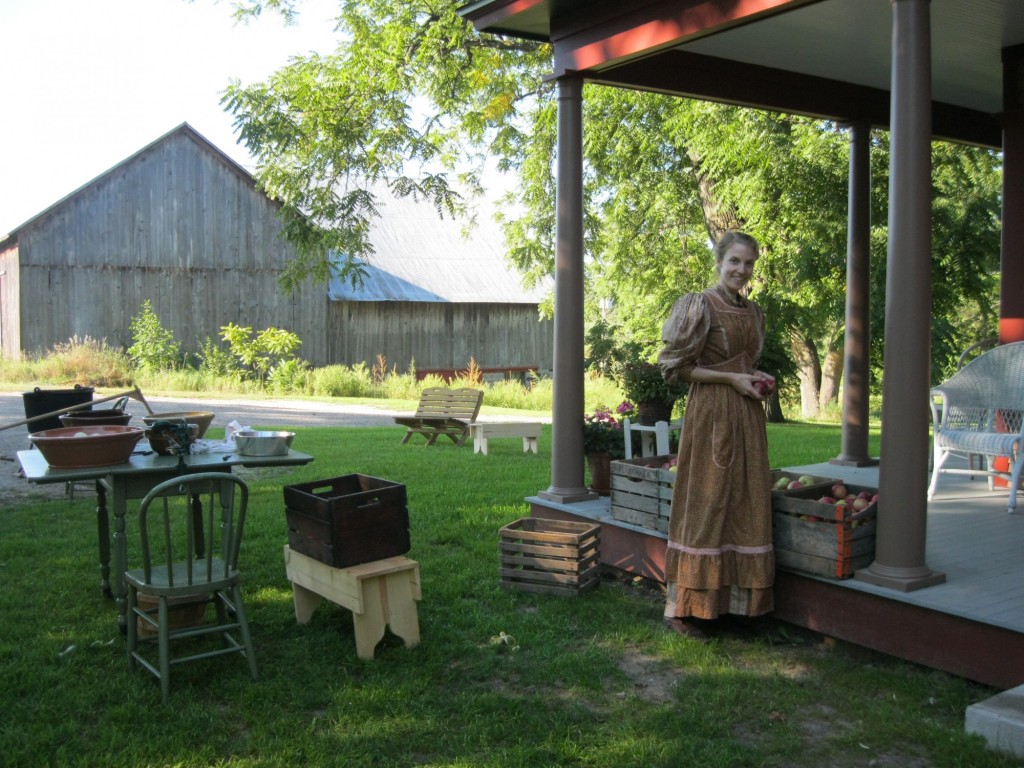 Getting ready to make apple butter 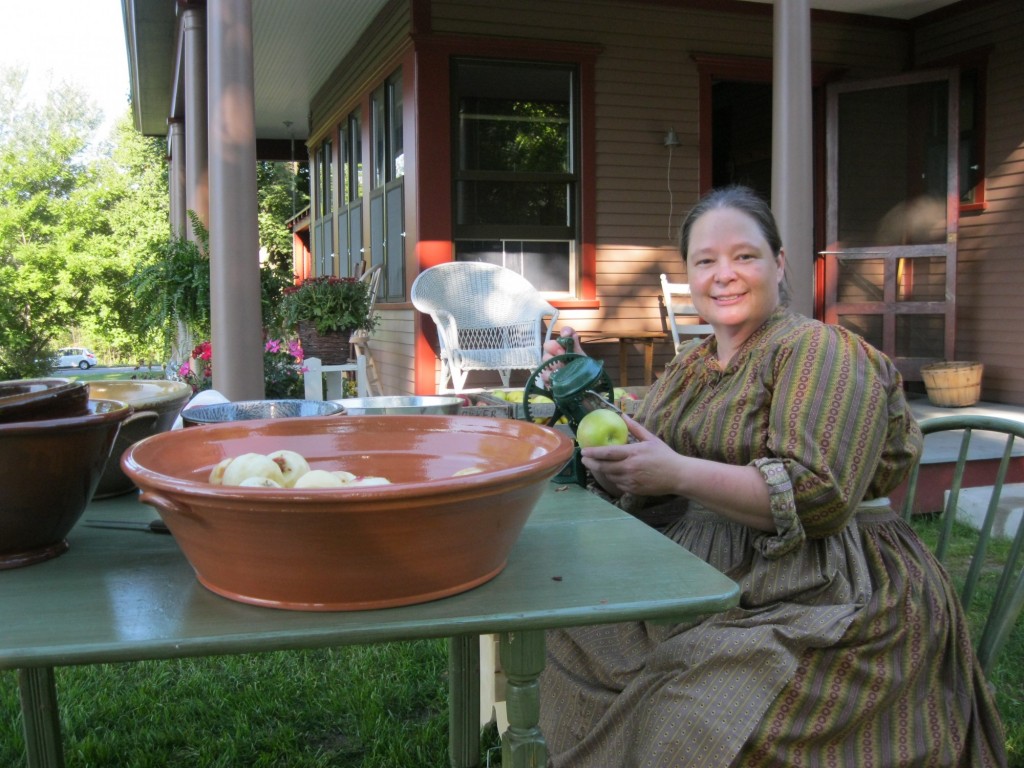 Peeling apples, its a big job, but we can do it! 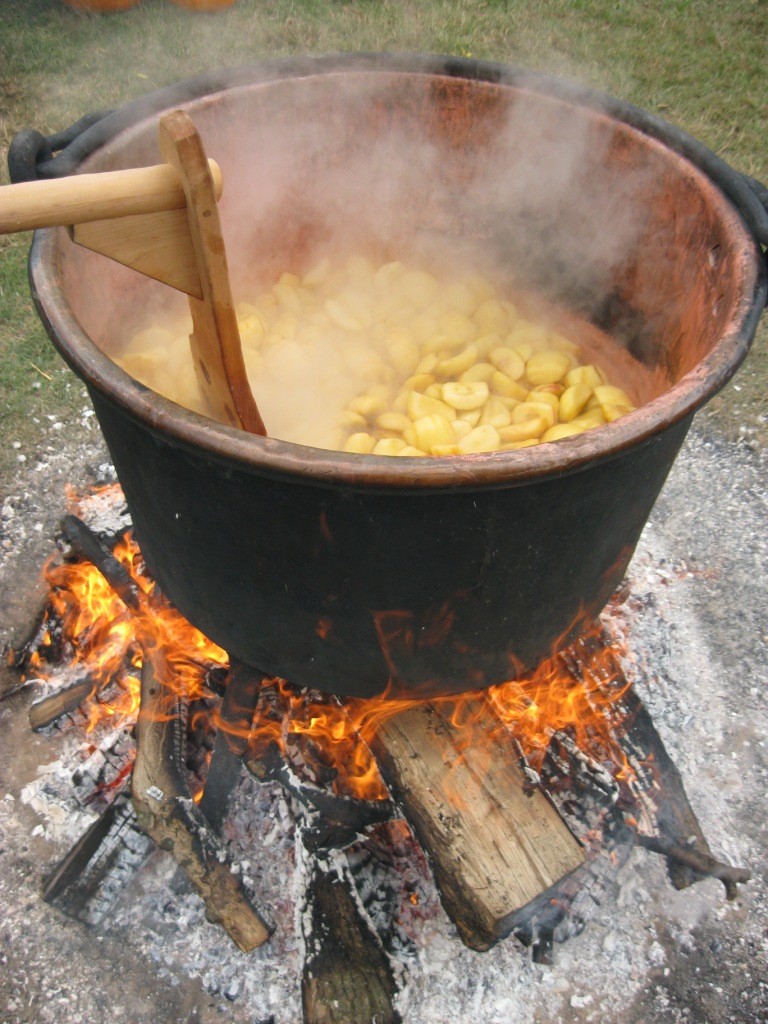 The apples have just been added and now for the big boil!

This is an ever changing and expanding blog post of a some of my favorite things to do in Leelanau County!

Tags: Beach, food, Pure Michigan, Restaurants
Posted in Places to eat, Things to do | Comments Off on Things to do

Last Sunday a pair of hawks was stalking my chickens and alas they killed one. But a friend was here and he saw it as it was happening and he was able to retrieve the chicken for me. The hawks took the head and broke the crop, but all the meat was still there.

Another friend plucked and cleaned the bird as I was busy making a dinner for 10. Today I’m stewing that bird. I hope to make Miss Parloa’s creamed chicken and a nice pot of chicken stock.

But the surprise was the fat inside the body cavity near the vent. This chunk of fat is about a cup in volume! Nice and yellow not white like store bought chicken. And this hen was almost 2 years old.

I’m pondering this fat and I’m going to render it in the eastern Europe/Jewish tradition of making schmaltz. I’ve never don this before! So to the internet I went and found the typical methods which includes onions. Sounds great. I will report back. Already smells great in here with the bird on the stove.

Direct Descendants are coming for Dinner

These fine folks also helped me with hog butchering, well they did all the hard work of butchering! They are old school farmers, growing cherries and apples and other tree fruits, but they also do a little of everything, including a little butchering in season. They give me gifts of pork fat, apples and venison! I’m able to buy straw and honey from them. I feel lucky to know them. I hope to learn all kinds of amazing things!

The dinner I am serving them features some of all the meat preservation experiments that I did. We will be finishing the pork chops stored in lard. I also opened up the pork barrel for them and extracted a ham,  that is soaking overnight to be baked tomorrow. We will have some of the bacon I salt cured and some of the fat back will be used in the pork and beans. I’m so excited!

The menu for my very special guest, direct descendants of Joe Reicha, the man who built my house

We’ve had a huge success here at Hillside Homestead with our historic meat preservation experiments. Hog butchering was Dec 13, 2012. Much of that meat was salt cured and some of it was stored in crocks in between layers of lard. And the larded meat has been a big success. Yesterday we opened the crocks and took out the first layer. One crock was packed with raw pork chops and another with cooked pork chops. All beautiful and good! A third crock with raw bratwurst in casings went   bad, I think that was because there was some air in the casings. More on that later and plans for butchering 2013

Packing meat in lard is a very old food preservation technique. This meat will stay good as long as they lard is cold and firm down in the cellar, i.e. probably till May. Here is the story in pictures….

This is back in December. The cooked pork chops are in the crock on the left and melted lard has been poured over the first layer. The raw chops are on the right and again liquid lard.

And here is another cooked pork chop going in

two of the raw pork chops excavated from their lard layer and ready for extraction!

First beautiful pork chop comes out o the crock just as good as it was 3 months ago, without any electric refrigeration or freezing!

Here are two raw pork chops ready for the oven and two cooked pork chops. The lard only stuck to the cooked food and not the raw

The 3 month old pork chops are dressed with my homemade kraut, caraway, sage, pepper and salt and a little lard. Ready for the oven

The final results! Yum! We forgot to take a picture before we helped ourselves, an honest mistake.

The pork chops were Delicious and preserved perfectly sweet! I feel a great success in recreating this historic food technique!